There is an olive tree in the garden. Beautiful silver leaves. It is especially lovely in the afternoon when the sun is slowly heading to the west and making effortless shadows. Those little pockets of light are absolutely everything I could ever imagine wanting to catch in a photo. I am sitting behind the house, drinking my coffee. The laptop charger was safe back in our living room in Wales, as far away from France as you can get it. It was not on purpose but turned out to be one of the best coincidences on this holiday. Well, that one and when our car broke down, so we were given a Fiat 500 to use. All of that was more a blessing than a curse. Better to be broken down there in front of the house than on the Autoroute del Soleil in 40 degrees driving 5 km/h. If we are lucky. Ah yes, our cars air conditioning unit decided to go on holiday too.

With our car in the garage we continued with our French adventure in a tiny Italian car made in Serbia. When the Universe says: Fuck you.

The olive tree is gently shivering in the afternoon August sunshine, while slurping my coffee I am planning on buying a filter coffee machine. If I had the laptop charger, I would have probably already done the research, compared the models, maybe even ordered it to wait at the door for when we get back. Since I haven’t, I am sitting in the garden next to the pool, enjoying the shade of the olive branches. I could probably take a few shots while everybody is snoozing. The olive is growing out of the stone, like many other olives. Rock and gravel. It seems like I have left my shoes at home too, walking around with dirty feet. If I can just step on that gravel, take few snaps and jump off perhaps the damage to my feet won’t be catastrophic.

And then there it was… a really precise and obvious moment in time and space. That August afternoon was meant to bring something. I raised my eyes to the sky expecting something, not sure what. Something had to happen.

A susurration. Crickets were quiet. Hot wind blew carrying the dust of that dry August in the South of France. It also carried a parasol from the neighbour’s back garden. Straight into our swimming pool. All the romance of the afternoon was gone once the pool alarm started howling. And it wasn’t a quiet, anaemic alarm. No, sir…this fella had its breakfast, lunch and snack, full batteries and fresh enthusiasm to scream as loud as possible. If it wakes my toddler up, that will probably be the end of my quiet afternoon.

I have always thought that stepping on a Lego in the middle of the night was horrible. On some weird scale of comfortlessness and pain running on the gravel is, must confess, pretty high, even compared to Lego. The trouble was not the gravel itself, more the fact that gravel was stuck to my feet as I ran down the concrete path around the house to the pool. Running, hopping, trying to clean the feet, ouching half loud. In my mind if I ouch loudly, I was more likely to wake the family up than the 350 decibels of alarm. A few heads are popping behind the neighbouring wall. They had ‘what-the-fuck’ on their faces, only in French, slightly offended that I am in possession of their parasol. Trying to open the pool gate, can’t remember the alarm code, the alarm is howling, and I swear starting to enjoy it. Enjoying the looks from the neighbourhood, attention from the Mond community and the whole of Gard county and most of all feeling of fulfilment. Finally serving its purpose.

During our two weeks stay more than few times it served its purpose, loud and louder.

It was just an alarm after all.

By the way the alarm code was 1234 but at that very moment the most difficult thing ever. 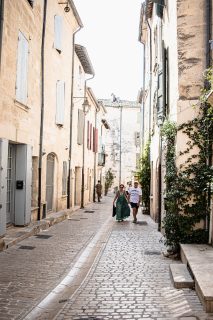 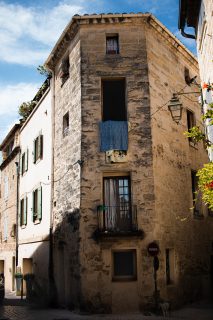